Trending
You are at:Home»Aviation»Realism, circa 1929 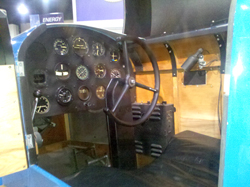 Tucked between displays of what will become the future of naval aviation is a tribute to the previous century of naval flight.

An early flight simulator is one of the more interesting attractions. It looks like a really intense kiddie ride, one of those machines found outside of grocery stores that that blare really loud music and buck kids around for a quarter. Basically, the aviation simulator is a miniature open-cockpit airplane — it’s around the size of a golf cart — sitting atop a hydraulic system. The cockpit has a series of controls that make the whole device move around.

It was developed in 1929 by Edwin Link and dubbed the “pilot maker.” Training included ground school and two hours of flight time. Cost: $85 per student.

In 1934 Link made his first big sale, six machines. And by World War II, about a half-million Allied pilots were training on roughly 10,000 of the devices.

Not too far away is a Super Hornet simulator. That one has three projectors that give a panoramic view of the ground and skyline and two seats positioned behind a panel of complex controls and interfaces. Despite its sophistication, it doesn’t have one of the biggest components of the pilot maker: the hydraulics.